"There is no greater joy than living the Christian life in the context of a lively, prayerful, faithful and creative parish church such as St. Michael and All Angels." 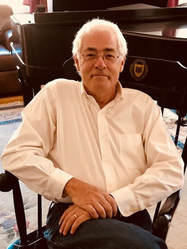 Joseph Britton is a parish priest, educator and theologian who is committed to the renewal and revitalization of the church through creative, imaginative pastoral leadership. He has extensive congregational experience in parishes of the Episcopal Church, having served churches in the New York City, Boston, San Francisco, and New Haven areas. Following two terms as the Dean of Berkeley Divinity School at Yale, where he was also McFaddin Associate Professor of Pastoral Theology (Adjunct) and a founding partner of the Youth Ministry Initiative, he was the Interim Rector of Christ Church, New Haven, Connecticut.

Born in Fort Collins, Colorado, Britton graduated from Harvard University. Before attending The General Theological Seminary, he worked as a government securities trader at Colorado National Bank in Denver. He is married to Karla Cavarra Britton (also from Fort Collins), who is an architectural historian with a particular interest in contemporary sacred architecture. They have one son, Nicolas, who is an undergraduate in the aviation program at the University of North Dakota. All three are great enthusiasts of the West, and have a home base in Hillsboro, New Mexico.

As an appointed missionary of the Episcopal Church, Britton served as Canon Missioner of the Convocation of Episcopal Churches in Europe and was the founding vicar of Christ Church, Clermont-Ferrand, France. With wide involvement in ecumenical relationships, he has a particular theological interest in piety as the synthesis of religious faith and practice in the lives of believing men and women.

Named an Episcopal Church Foundation Fellow, Britton completed his doctoral studies at the Institut Catholique de Paris. He is the author of Abraham Heschel and the Phenomenon of Piety, and has published numerous articles in journals such as The Living Church, the Anglican Theological Review, the Sewanee Theological Review, and Anglican and Episcopal History. A widely traveled preacher and lecturer, Britton preached the Seven Last Words at St. Thomas Fifth Avenue in New York City on Good Friday 2010; has lectured or taught at Bishop Gwynne Theological College in Juba, South Sudan; St. Nicholas Seminary in Cape Coast, Ghana; Keble College, Oxford and Westcott House, Cambridge, England. He has led numerous parish and seminary retreats as well as frequent pilgrimages to Canterbury and Coventry Cathedrals. He is an Associate of the Society of St. John the Evangelist, and serves on the board of the Friends of Canterbury Cathedral in the United States as well as the Institutional Review Board of the Sandia National Laboratories, Albuquerque. He is also a consultant to the Board for the Friends of the Camino, an Anglican Center in Santiago, Spain. He is passionate about New Mexico's landscape, history and peoples, loves music, and likes either red or green chill—depending on the day!

Click below to read "Reconnecting with Church," an essay in The Living Church, March 26, 2017